running a doula business can be difficult, we can help you, join usRegister Now
Share Tweet Pin G Plus Email 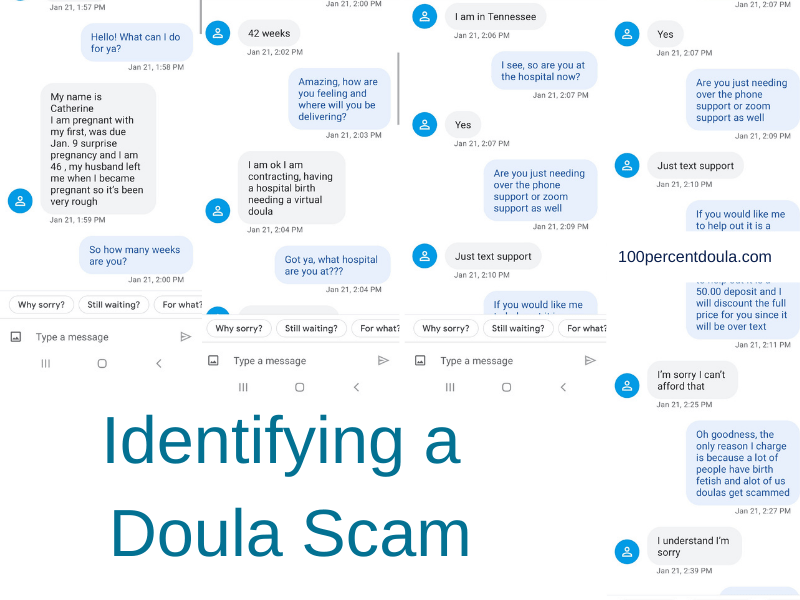 You may have heard that there are people out there who like to scam doulas. These are people who have various reasons for their misguided attempts. This is going to be a compilation of how you can recognize a doula scam and what you can do about it.

The email, text, instant message always tends to go something like this: “Hi. Are you a doula? I’m looking for a doula, but I’m overdue… In fact, I’m contracting right now and I think I might be in early labor. Is it too late to get a doula?”

First of all, you will occasionally get legitimate communications from people like this and it’s always fair to treat everyone with respect.

What are the red flags?

There are a number of red flags that other doulas talk about when trying to identify a scammer:

Why does this happen?

There isn’t just one thing that causes people to do this. Why would someone think it’s funny or a good time to waste the time of someone who is being generous and giving around birth? There are even doulas who have had similar versions of support scams run from people claiming to be having miscarriages.

Buzzfeed wrote an article claiming: “For years, doulas have dealt with fakers who want to roleplay a pregnancy or childbirth fantasy. “ That certainly could be it or it could be a 2020s version of prank calls.

What can you do about it.

There are a number of things you can do about it. The first thing is to trust your gut. If something doesn’t feel right – this might not be the right client for you. That may mean it’s a scammer, but it could just also honestly not be the right fit.

Just remember, this isn’t your fault, even if you feel like you got pulled in a bit before you realized it was happening – the caring nature of doulas means this happens sometimes. Have a line at which you always know that something has crossed from questions that might lead to someone signing a contract and what has ventured into the territory of an actual doula visit for services. You might even have a fee that you’d charge for a simple meeting. Many doulas offer a one-off prenatal meeting for planning purposes for a small fee. Your time is valuable.

Come talk about it with other doulas in our community!

Abby Jorgensen, doula, wrote about her experience with one such scammer: “Sometimes people with a birth fetish or pain fetish try to get doulas to essentially do sex work for free and without obtaining consent. (Sometimes they’re also trying to get your bank account information, but I want to talk about the first thing.)

“One particularly gutwrenching example comes to mind. An important focus in my work is bereavement, so I often walk with families who experience miscarriage, stillbirth, or infant loss. Last year, I had someone contact me on IG through a new account, asking for support (none of this is unusual in bereavement situations, where social stigma blaming parents is so strong).

“They said they were going through a stillbirth and were in the process of giving birth. For a few moments, I messaged them – how was their headspace? How did they feel about the space in which they were giving birth? And very quickly, things started to not add up. In particular, why was this person so eager to have me tell them what things should look like or feel like, rather than just letting me listen to them? It was when they sent me a telltale sign – a message that simply read “ohhhhhh ahhhhhh” that I began to realize what was happening. A few quick questions later, and the person stopped responding (as all scammers do when they realize you’re onto them). Horrified, I deleted the conversation and blocked the account.

“I began googling and learned that miscarriage and stillbirth fetish are a thing. That’s the one and only bereavement scammer I’ve had (at least, that I know of). I still get angry thinking about it. Someone saw my years of experience walking with dozens of families through the most painful experiences they could imagine, and because of that, that person had tried to use me for sexual gratification. Why? Just, why?

“In this example, the scammer check that I instituted in my birth doula work had failed me. If I suspect a scam, I say, ‘Wow, sounds like you’re progressing quickly! I offer virtual support for $x. I’ll send you my contract right now, and will provide services as soon as you pay. What’s a good email address for you?’ (and typically I never hear from them again.) But I don’t currently charge clients for my work as a bereavement doula, so that person slipped through. It hurts to ‘get got’, and it also hurts to know that someone was using such a painful experience for so many to get my unknowing and unwilling participation in their sexual fantasy.”

Come talk about it with other doulas in our community!

Another conversation from a potential spammer and a doula…

Filed under: Business, Make it Last
Share Tweet Pin G Plus Email
previous article: How to Get Doula Reviews
next article: Four Things You Can Do in Addition to Your Birth Doula Work I help doulas who are frustrated with the business aspects of their practice by giving them easy-to-digest, actionable, repeatable steps to streamline and simplify business maintenance allowing them to focus on the true heart of their business; their clients.